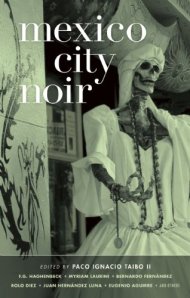 “Twenty-one million residents in the metropolitan area. An infinite city, one of the biggest in the world, a fascinating blanket of lights for those arriving on planes; a huge Christmas tree on its side—red, green, yellow, white; mercury, tungsten, sodium, neon. A city gone crazy with pollution, rain, traffic; an economic crisis that’s been going on for twenty-five years. A city famously notable for the strangest reasons: for being the urban counterpoint to the Chiapas jungle; for having the most diverse collection of jokes about death; for setting the record for most political protests in one year; for having two invisible volcanoes and the most corrupt police force on the planet . . . Mexico City Noir may not be sponsored by the city’s department of tourism, but if anyone, from anywhere on earth, were to ask whether the writers recommend visiting Mexico City, the response would be both firm and passionate: ‘Yes, of course.’ Because this is the best city on the planet, in spite of itself.”